We weren’t sure what to expect when we visited the Synagogue Museums in Josefov and the Jewish Quarter in Prague. Would the area be run-down and depressing? Would we find more out about what had happened here than perhaps we wanted to know on a weekend break?

Well, the answer is that it was one of the most humbling and thought-provoking experiences we have encountered. The area of Josefov is alive with beautiful buildings making it an area in Prague that deserves your attention.

Known as Altneuschul, this is Europe’s oldest active synagogue. It is also the oldest surviving medieval synagogue in the world and was completed in 1270. It is a very simplistic building, and its vaulted stone ceilings and gothic arches and columns are reminiscent of the Middle Ages. Worship has continued here for 700 years, only stopping during the Nazi occupation.

Classed as one of Prague’s most important synagogues, services regularly occur with male worshippers sitting or standing against the walls. Female counterparts listen through an opening in the wall from another room.

Built in the early 20th century to replace three previous synagogues destroyed during the re-development of the Jewish Ghetto. It is used as a place of worship rather than being dedicated as a museum but is used as a cultural and exhibition venue in addition to a place where organ concerts are held.

The remainder of Prague’s synagogues are museums dedicated to the Jewish people’s lives throughout the centuries.

Built by the mayor of Prague in 1592, this synagogue was burnt down in 1689. A new neo-Gothic synagogue was built from 1893 to 1905 and housed a collection of Jewish silver, textiles, and books. The Nazis brought the collection to Prague with the intent to set up a museum detailing the people they planned to annihilate.

Klausen Synagogue and the Ceremonial Hall

Constructed at the turn of the 20th century and near the Jewish Cemetery, Klausen Synagogue hosts an exhibition devoted to traditions, customs, and the Jewish Burial Society. The Ceremonial Hall was where the tradition of washing the dead before burial occurred.

You are inexplicably drawn to the name inscriptions on the walls as you enter the Pinkas Synagogue. They are dedicated to nearly 80,000 Czech victims of the Holocaust and are known as the “Epitaph to those who have no Grave”.

The synagogue also houses drawings made by the children held in Terezin Ghetto and sent to the gas chambers. It is heartbreaking to see but allows us to remember those children through their art. If you are interested in learning more about the site of a former concentration camp and places connected to the Second World War, you can book a tour of Terezin.

Adjacent to the Pinkas Synagogue museum is the Old Jewish Cemetary, the resting place of Jews from the 15th to 18th century. Overcrowding in the cemetery was a real problem then, and bodies were buried on top of one another. The result was over 12,000 gravestones, all juxtaposed against one another. Visitors can walk through the cemetery and take a moment to contemplate life and death.

The cemetery is one of the oldest Jewish burial grounds in the world. The New Jewish Cemetary was established in 1890 when the Old Jewish cemetery ceased to serve its purpose. It is now the only burial area for the Jewish community in Prague.

This is a stark contrast to the previous two synagogues with its grandiose Moorish styling and bright colours. We chose to go inside as it housed the biggest collection of Jewish artefacts, and we were curious to learn more about Prague during the Holocaust.

To say it was moving would be an understatement. To see evidence of how the Jews were treated in Prague during the wars was an education. We pray we will never have to encounter it in our lifetime.

If you can visit only one of Prague’s Synagogue Museums, then make it this one. You will come away shocked and moved and thankful for your own life and freedom.

Copyright of video owned by the Jewish Museum in Prague 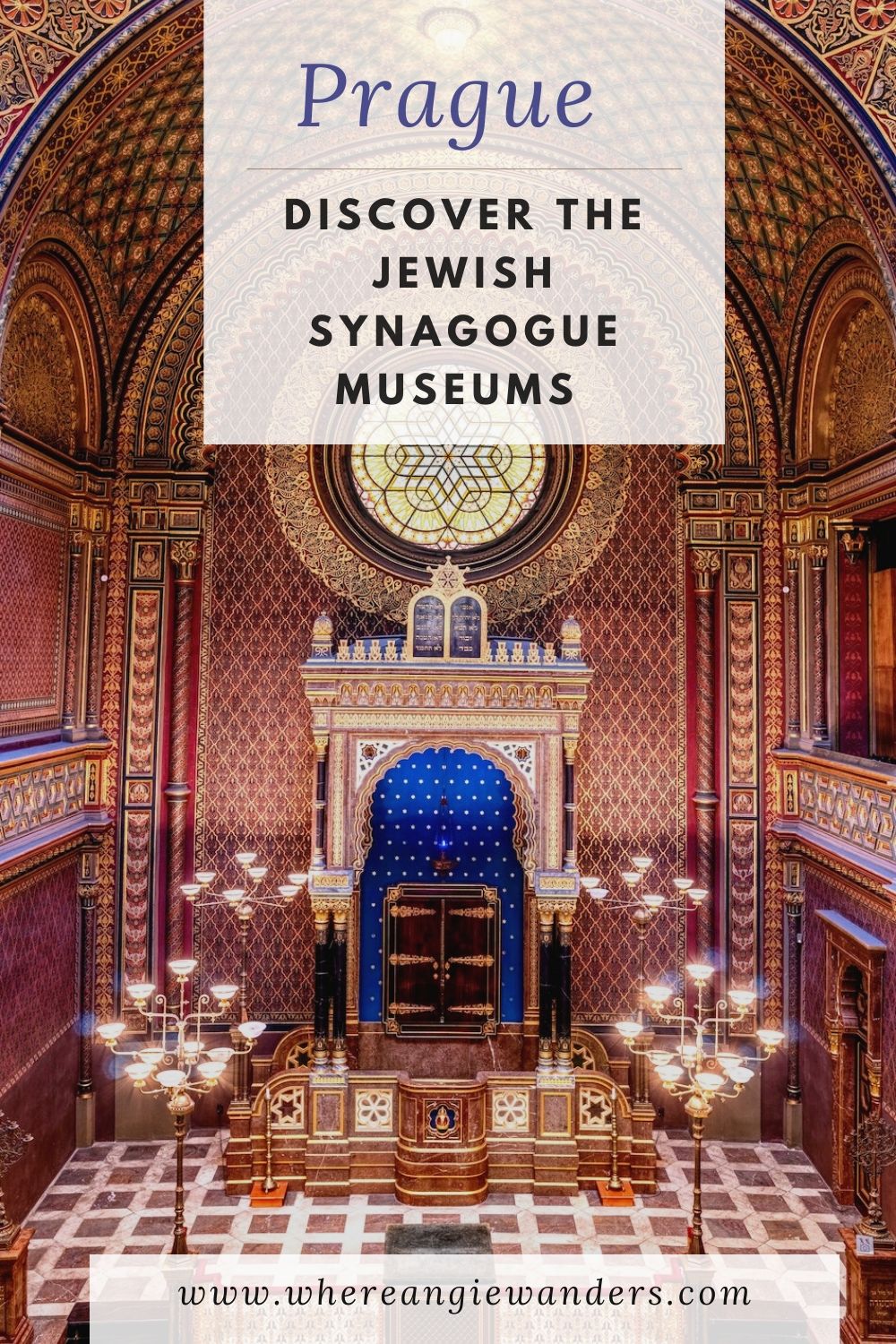 I don't think I've ever been inside a synagogue before, and I didn't imagine there would be that many of them in Prague.. but when I finally get here (and it's on my list) I'm defiantly going to make time to visit the Jewish Quarter. What a wonderful way to immerse yourself in a different culture. I'm not religious at all, but I love religion buildings, especially mosques. The county I'm from in the UK has the largest collection of Norma and Anglo Saxon churches .. and I never get tired of snooping around one of those, but they're nowhere near as grand as these synagogues.

They are well worth a visit and I feel sometimes overlooked however they share with us a time in history that should be remembered. The interiors varied from plain to very intricate which was a delight to see. I love our churches here in the UK, always discovering new ones. The village I live in has a church that was mentioned in the Doomsday book and has a fresco on the back wall of heaven and hell. Apparently visitors from all around the world visit to see it.

Thank you Angela. I've just experienced a number of WOW moments reading this incredibly fascinating history. I'm looking at the possibility of staying in Prague for a number of weeks later this year. I'll certainly be adding this area of the city to my must see. The architecture is truly beautiful.

I am so pleased you enjoyed the read and found it interesting. It seems a lot of people visit Prague without venturing to the Jewish Quarter so I hope my article will encourage more to visit this fascinating and moving area of the city.

I love the architecture and the detail. Thanks for sharing

I’m regretful that I didn’t take a closer look at these Synagogues on my visit to Prague. I wandered around the Jewish Quarter, but resisted entering and now I wish I had. The Jewish Museum in particular intrigued me, it’s important we don’t forget any of that extremely important history. Thank you for sharing, I’d like to return to Prague one day, and when I do, I’ll be using this to guide me.

I’m glad it highlighted the synagogues for you Nicky. They are definitely worth visiting and remind us what the Jewish people had to endure.

The detailing on them is just insane! So beautiful and regal!

The workmanship that has gone into them is amazing. So vibrant in colour.