When I discovered I could have a sleepover with elephants at Knysna Elephant Park, I knew I must incorporate this bucket list animal experience into our 2-week Garden Route Road Trip Itinerary through South Africa. Could anything be more magical than spending two days with these majestic animals? Oh, and did I mention I would be staying in a room with a view of their sleeping pens?

How to Reach the Knysna Elephants

We had started in Cape Town, and Knysna Elephant Park in Plettenburg Bay was a 6-hour drive away on the N2 motorway. As we were heading along South Africa’s Garden Route to go on safari in Amakhala Game Reserve, this stop worked perfectly for us.

Let me emphasise at this juncture that Knysna Elephant Park is one of South Africa’s ethical animal experiences and is scientifically run. Elephants are left to roam free during the day and put into their indoor pens or bomas at night. They are not taught to perform for the public and are treated by their keepers with love and respect. I saw this firsthand and was extremely impressed at the dedication shown by all staff.

Knysna Elephant Park is recognised nationally and internationally as one of the world’s best captive elephant facilities. 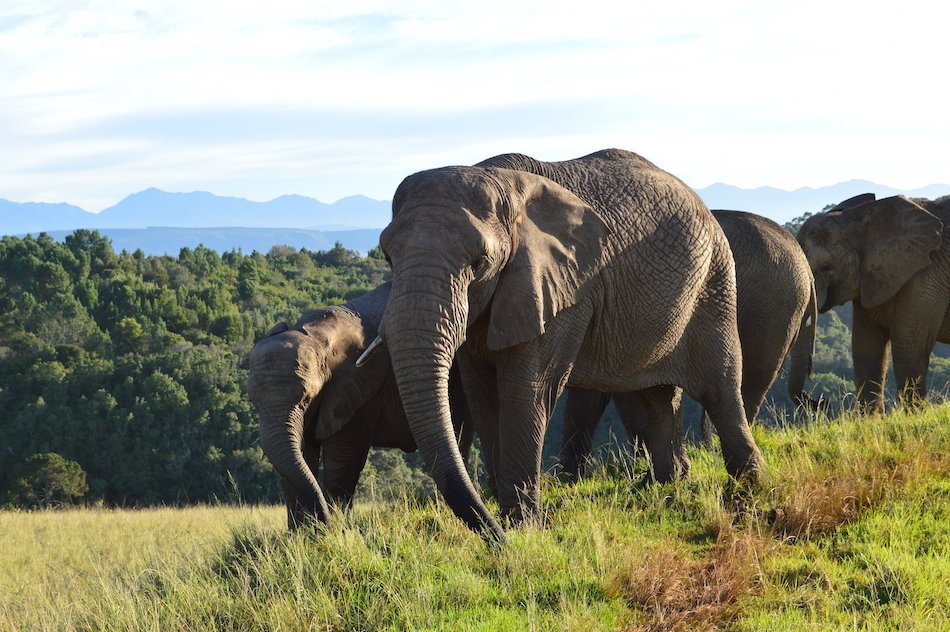 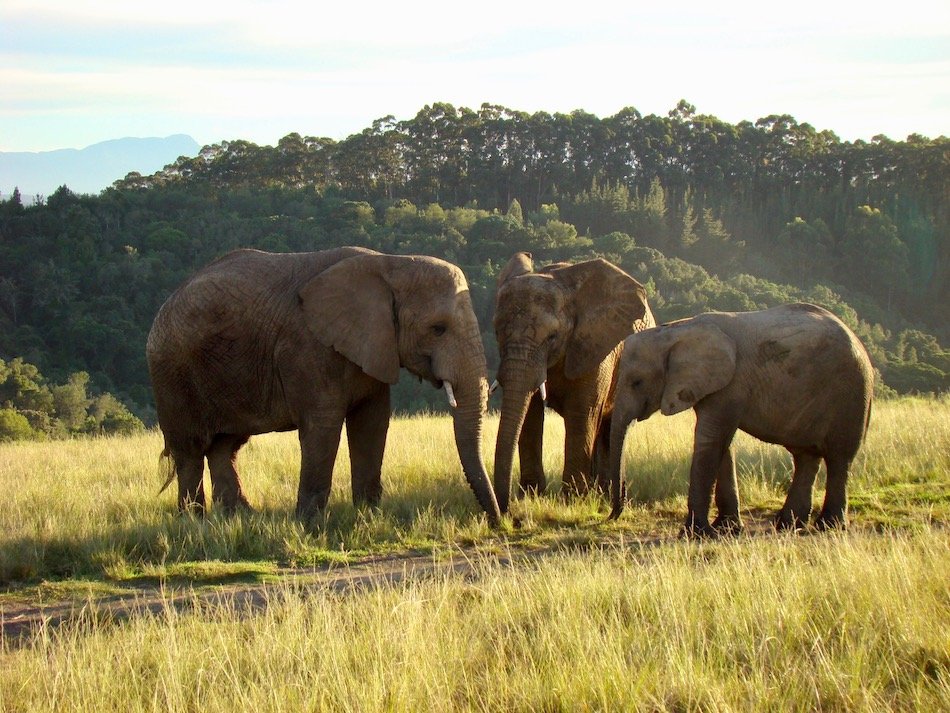 Knysna Elephant Park established itself 20 years ago to rescue two baby elephants. Over the years, the need for a sanctuary became evident, and elephants were given a new start after being abandoned by their mothers, saved from being culled and from owners who no longer wanted to work them due to age.

As soon as we arrived, we went to meet the elephants. Meeting these magnificent creatures was one of the most amazing things I have ever experienced.

Sally, the herd’s matriarch, was my first elephant encounter, and it exceeded all my expectations. I offered her some fruit and veg and waited to see if she would accept them from me. I was elated when she did and felt humbled by her actions.

Two Mothers Meet One Another

I am 5ft 7in, but next to Sally, I felt tiny. She could have knocked me over with one shake of her body, but she was so gentle and serene. From one mother to another, I felt we bonded at that moment, and I looked forward to meeting her again.

The elephant keepers introduced us to other herd members who all curiously stood and looked at us as if we were on display rather than them. From young bulls to mothers, this herd all lived together in harmony under their benefactors’ caring eyes.

It was then time for the elephants to have some fun at the lake, and they certainly did. From the bull elephants to the mothers and teenagers, they all wallowed in the water, and you could see how spontaneous it all was for them.

Observation and understanding is the park’s ethos, where interactions between guests and elephants occur naturally, and their behaviour is intuitive rather than controlled. 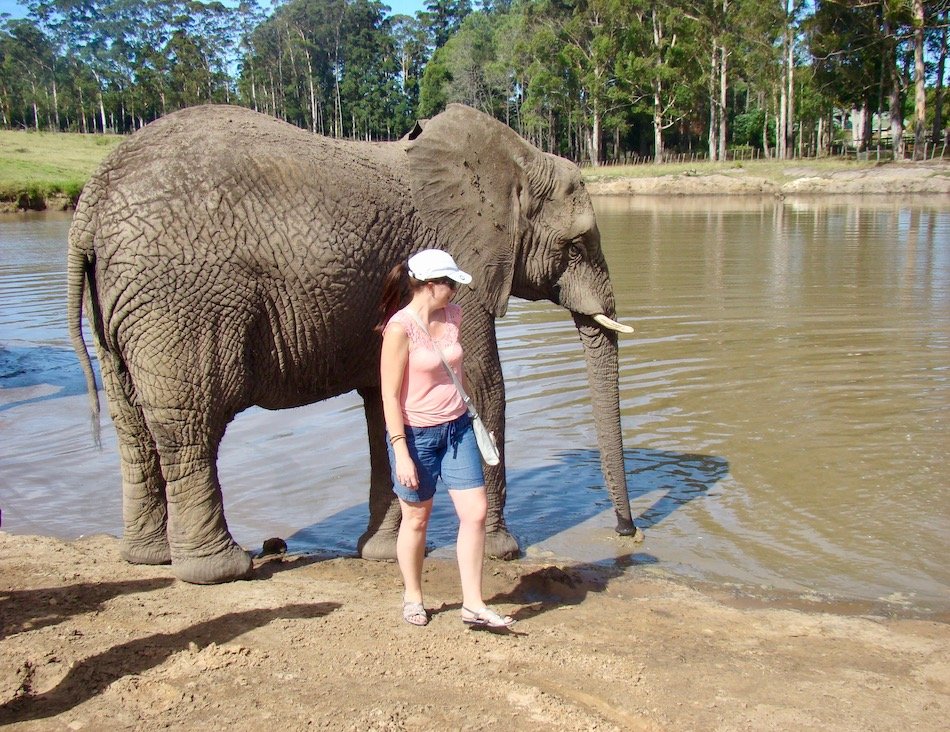 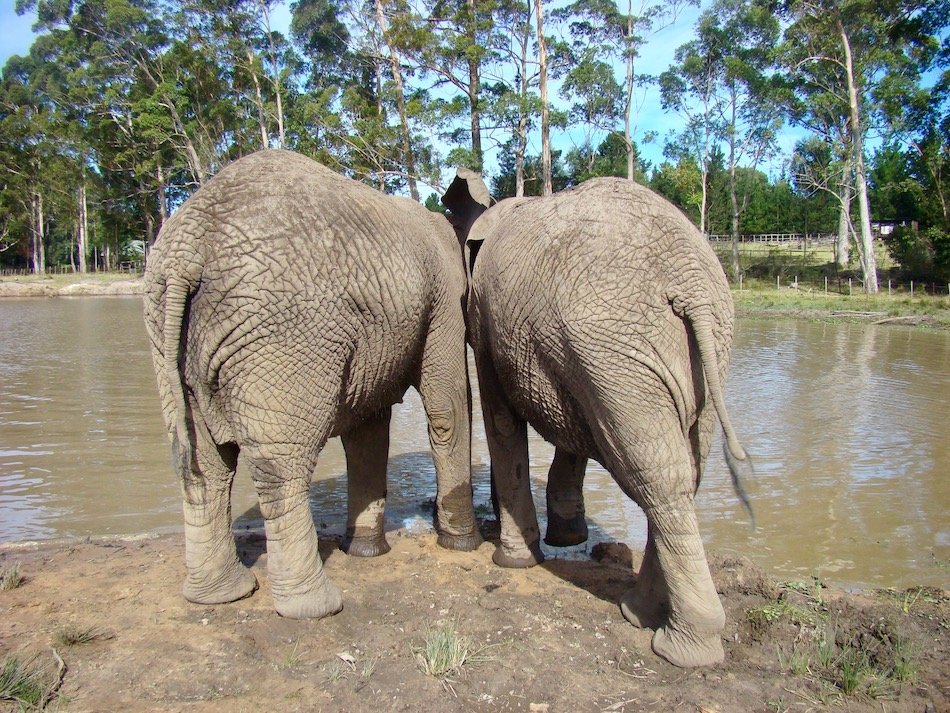 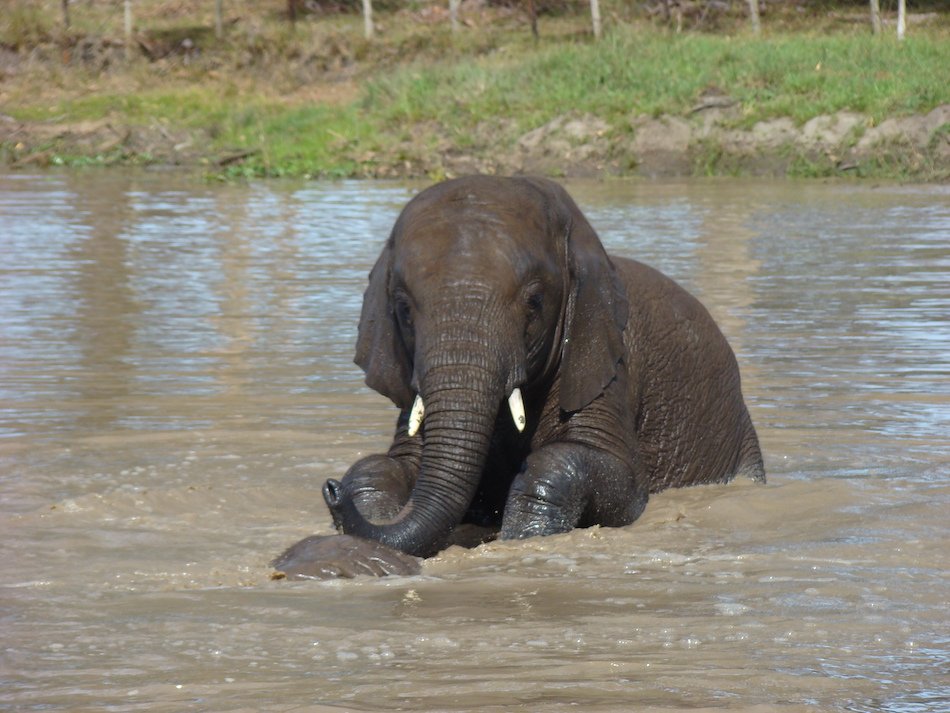 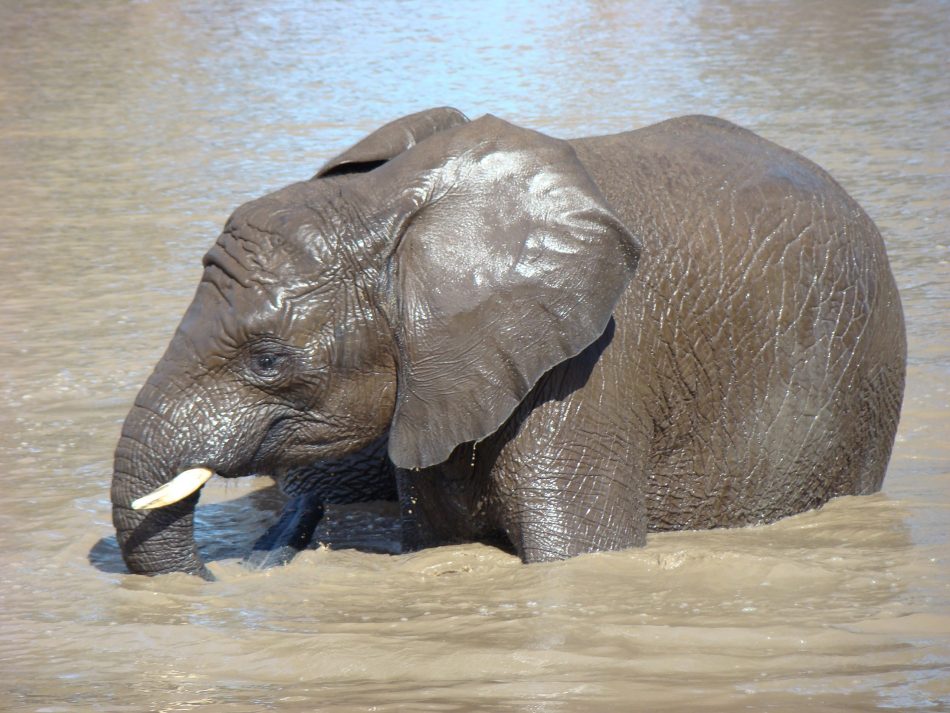 So what is it like having a sleepover with an elephant?

What I can tell you is that it is a memory you will never forget. Did you know elephants can sleep standing up? Did you know that elephants snore and expel air from their nether regions as they sleep? It sounds like I’m describing an older man, doesn’t it but believe me, that’s what they do, and it’s loud!

I couldn’t go to sleep for a while because of the noise, and it made me laugh so loudly that I managed to wake my husband up (who coincidentally was snoring only slightly lower than the elephants!)

As the sun starts to set, the elephants return to their pens/bomas. It is interesting to watch them go straight to their sleeping quarters without much prompting. The elephants can sleep indoors or out. A communal seating area offers guests the perfect viewpoint to watch the nighttime routine take place.

A Room with a View

Our room was comfortable and had one window that looked over the elephant pens/bomas. Once they are all tucked up, ready to sleep, you have a perfect view of what they are doing. I didn’t sleep much the night we were there because I kept getting out of bed to watch them; after all, who wants to sleep when there is a herd of elephant beneath your window.

Some of the older herd fell asleep straight away, some of the teenagers just weren’t ready for any shut-eye, and a newborn baby (yes, that’s right, he was just like Dumbo) was bottle-fed on a straw bale beneath our window by two volunteers who stayed awake with him all through the night. You can’t get more magical than that, can you?

What happened to the wild Knysna Forest Elephants?

The Knysna Forest Elephants used to roam the areas of Knysna and neighbouring Tsitsikamma forests up until their demise in the early 1900s. Ivory hunters and farmers recultivating land for their own needs meant that the elephant numbers reduced dramatically.

Overnight stays are in the main lodge and consist of twin or double en-suite rooms. Rooms are African in design in keeping with your location.

A small cafe caters for guests and visitors but shuts at 4.30 pm although dinner can be organised by request if you are sleeping over. Breakfast is served for guests each morning after your sunrise walk.

The park also offers other experiences with the elephants such as breakfast picnics or sundowners.

We left the park in the evening and went for dinner at Zinzi Restaurant in the nearby Hunter Hotel. The food was superb, and when the bill arrived, we questioned it because it was so reasonable.

For a similar meal in the UK, we would have paid triple the amount we did in South Africa. The server thought there was a problem with our food, but we explained that for the quality and quantity we received it was amazing. She found that quite amusing.

A Sunrise Walk with the Elephants

Waking up at sunrise is no hardship when you know you will walk with elephants to their watering hole. Even though the temperature was chilly first thing in the morning, we were eagerly awaiting our experience.

We were each given an elephant to pair up with, and I got the formidable matriarch, Sally. My husband and two boys were matched up with elephants of varying sizes.

We headed off on the short walk from the lodge, through the fynbos (native shrubland) and towards the mirror-like watering hole. I didn’t realise that the elephants’ size makes them clumsy as they walk, and I happened to be at the side of Sally as she swaggered into another elephant, nearly squashing me between them.

I was glad the keeper was vigilant and with a quick tap and a call out in his native language, Sally moved away, and I was saved. What an experience, nearly becoming the filling to an elephant sandwich!

We watched as these gracious animals made their way to the water edge and gently re-hydrated themselves – a herd of elephants, a mirror-like watering-hole and the mountains in the distance, what an experience.

If you are driving South Africa’s Garden Route, then this experience should be on your itinerary. It will be an insight into the life of the African elephant and allow you to get up close and personal with the strongest land animals in the world.

To stand beside an elephant, to feed and touch an elephant and to watch as they interact with one another is priceless

We seem to love the same type of travels! Bookmarked and added to the bucket-list.

This experience is definitely one of a kind and therefore perfect to add to a bucket list.

This would be my dream! There is no way I'd be able to sleep either if I could watch elephants all night. It's just so sad that there aren't any left in the wild there now (apart from that sole female). I've saved your Pin in the hope we get to visit there some time in the future. Thank you for sharing this incredible experience.

I'm glad you enjoyed it and I hope you do get to South Africa one day, it is a magical country.

I'm glad you enjoyed finding out about my experience. There are many other ethical animals encounters to have along the Garden route so it is a great place to come and interact with animals knowing that it is all done in the correct manner.

What a rare and wonderful experience. Truly magical!

This looks like an amazing spot! Some really gorgeous photos too.