Asia / Hong Kong / My Epic Round the World Trip

Why You Need to Visit Lantau Island in Hong Kong 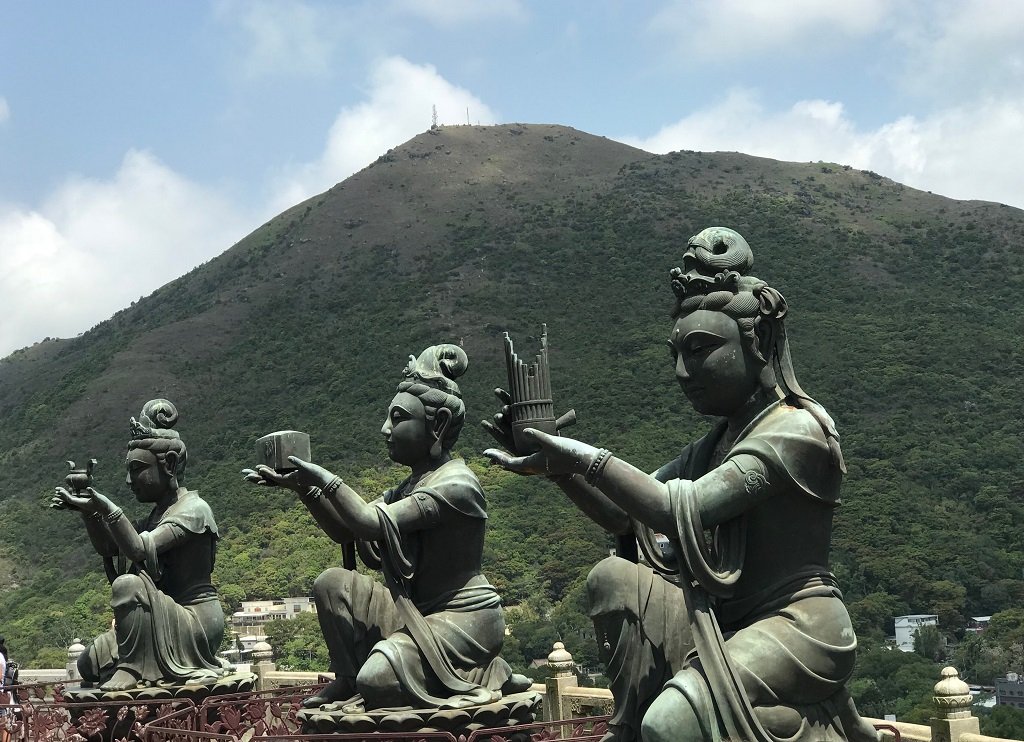 Lantau’s centrepiece is the bronze Buddha that sits atop the hillside and casts an ethereal gaze over the Po Lin monastery. Indeed no Hong Kong itinerary can be complete with a visit to this fascinating island.

How to Get to Lantau Island

Public transport or an organised tour can whisk you to Lantau in 40 minutes. I usually like to travel independently, but with only a few days in Hong Kong, I decided to let someone else act as my guide and booked a day trip to Lantau Island complete with sightseeing and lunch.

Maybe not the most exciting part of the day but the Tsing Ma Bridge does hold the title of being the longest road/rail suspension bridge in the world. We stopped at the viewing platform of this iconic structure before our crossing over to Lantau Island.

Only opened in 1997, up until then the only way to get to Lantau was by boat. The local people welcomed the construction of the bridge, and now both rail and road vehicles can travel back and forth easily, greatly reducing journey times.

After crossing the bridge, our next stop was at Hong Kong’s longest beach, Cheung Sha. It was more a convenience break than a chance to strip down to our swimming costumes and dip a toe in the South China sea, but it was still lovely to feel sand between my toes in such a beautiful location.

If you are coming to Lantau Island without a tour, then make sure you allow yourself some time to spend on this 3km stretch of beach. There are two areas to it, the lower part where restaurants, cafes and watersport rentals are located and the upper part, where we stopped, offering more of a remote vibe.

It was also scorching, so make sure you have all the protection you need for a beach day in the Hong Kong sunshine, or you may return looking like an overcooked noodle! 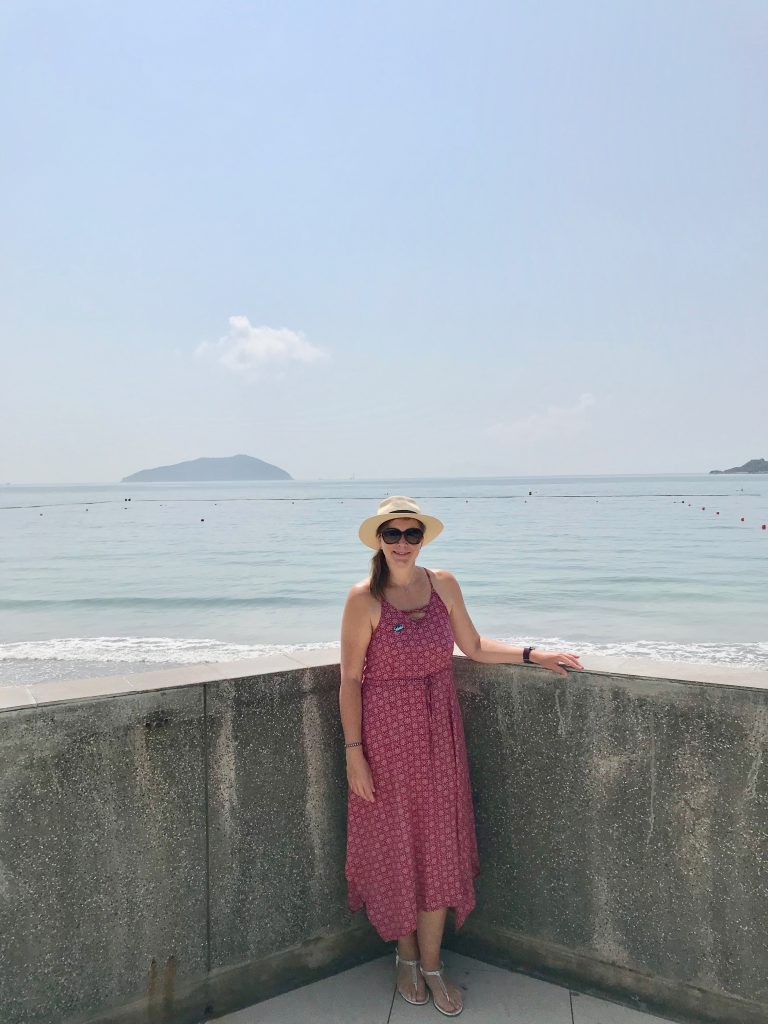 Walking through Tai O Fishing Village was a real experience and one of Hong Kong’s hidden gems. Traditional shops, mainly selling dried fish of every shape and size, lined the maze of small streets and at every street corner, we noticed a tiny religious shrine. Some of the “delicacies” on offer were quite curious to see, such as the fermented egg yolks that the children gobbled up like sweets, but it was a fascinating insight into the local Chinese culture.

We joined a tour boat and were shown around the small waterway for a closer look at daily life in Tai O Village.  It was fascinating to see fishing junks tied up alongside stilted wooden houses and local people going about their everyday routines. This culture and lifestyle are a million miles away from my own but to be part of it for just a while was a privilege and an experience we thoroughly enjoyed.

Back on the coach, we meandered through the scenic countryside and made our way up to Po Lin Monastery, home of the world’s largest outdoor seated bronze Buddha.

The Buddha was to be the highlight of the trip, and as we rounded the corner and saw the Buddha serenely gracing the skyline and looking down over the monastery, it was everything we hoped it would be.

There are 268 steps to reach Tian Tan, the official name for the Big Buddha, but we got lucky, and our coach took us straight to the top, so no stairs to climb!

When you stand beneath the Buddha, you realise just how enormous the statue is and the remarkable feat of engineering involved to create it.

The swastika on the chest of the Buddha is a Buddhist religious symbol of peace and spirituality dating back 5000 years, much like the cross represents the Christian religion.

The Buddha’s right hand is raised, representing the removal of affliction, while the left rests open on his lap in a gesture of generosity. The lotus flower the Buddha sits upon represents purity.

Surrounding the Buddha stand six other statues called the Bodhisattvas, which represent deities on their way to reaching enlightenment.

At the bottom of the stairs, we continued to make our way towards the monastery, where we were to be given a vegetarian lunch both prepared and served by monks.

We walked through the enormous white entrance gate and along the pathway flanked by the Twelve Divine Generals who guard the Buddha each symbolising an animal from the Chinese Zodiac, armed with a particular weapon. They also represent different times of the day. 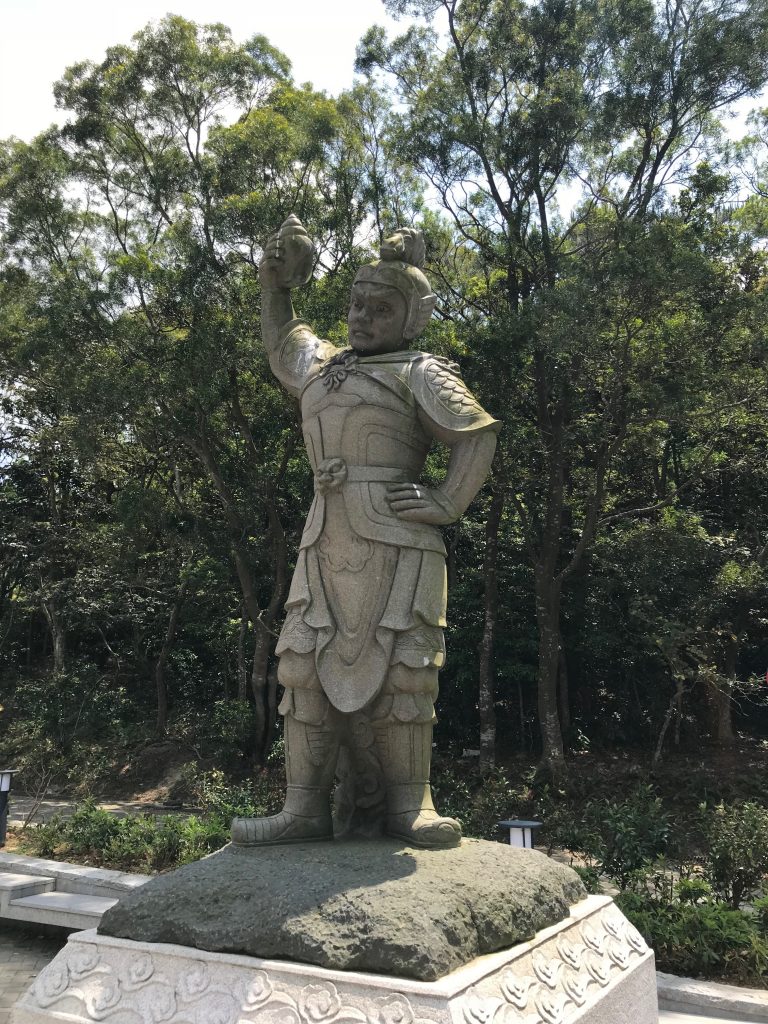 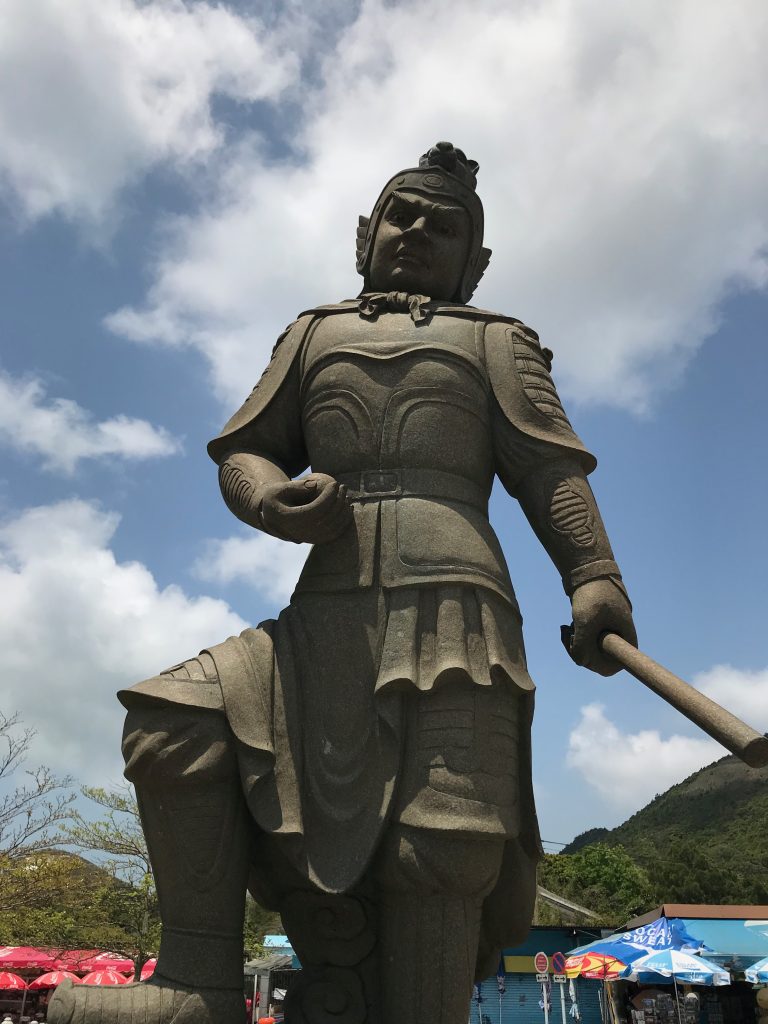 General Kimnara represents the tiger of the Chinese Zodiac and holds a rope, though it looks very much like a bat and ball to me! He represents the hours of 3-5 am.

We came face-to-face with quite a few sacred cows wandering along the paths which were fun to see. Tourists from certain countries seemed fascinated with the concept of capturing a selfie with a holy being and posed and pouted with them for ages! 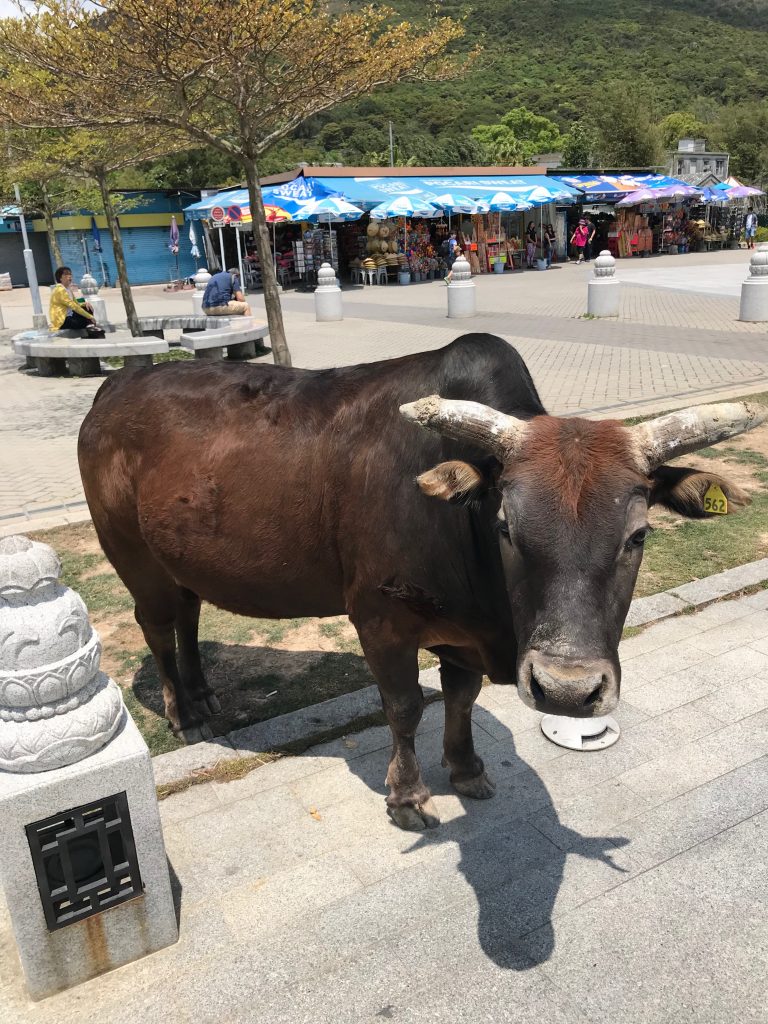 In the monastery complex, there are several other religious buildings, and as it is a large area you do need to give yourself a few hours to be able to see everything at your own pace.

Incense sticks are sold in all the stalls that line the pathways, and these ceremonial sticks were probably the biggest I had ever seen. They are so big that ladders are required to get up to the top and light them so I’m not sure they would have fitted in my suitcase!

The final part of our trip was to descend the mountain on the Ngong Ping 360 Cable Car, the world’s longest cable car at 5.7km. The journey takes 25 minutes from the start at Ngong Ping to finish at Tung Chung, and the 360-degree scenery en-route is spectacular.

Being wary of heights I wasn’t sure about upgrading to a crystal cabin with a transparent floor but let’s face it this was a once in a lifetime chance to push me out of my comfort zone, and so we just went for it. I managed to last the journey and can report that it isn’t as scary as I thought it would be.

We jumped back on our tour coach at the bottom of the cable car ride and returned to our hotel, The Royal Garden in Kowloon.

We had seen all the highlights of Lantau Island and were ready to kick off our shoes and relax. Visiting Po Lin monastery and Big Buddha had been very inspirational, and our organised trip had allowed us a marvellous insight into the more serene side of Hong Kong.

Follow me on the next stop on my Round the World Trip:  Hanoi in Vietnam. 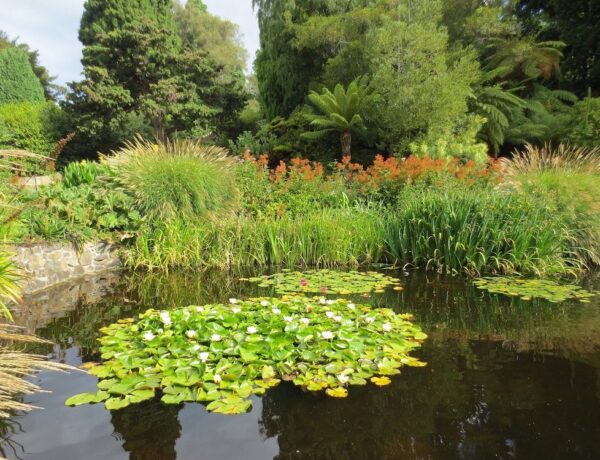 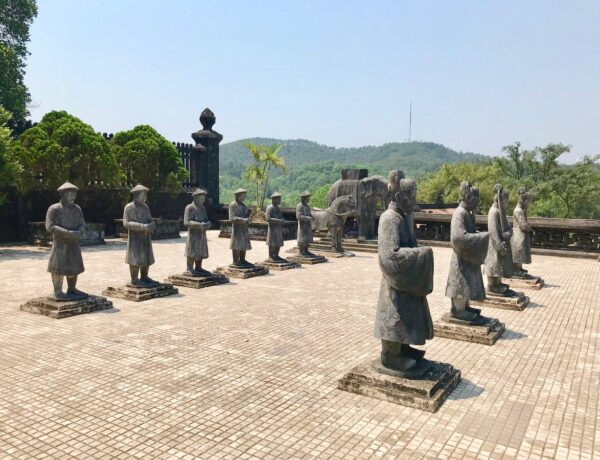 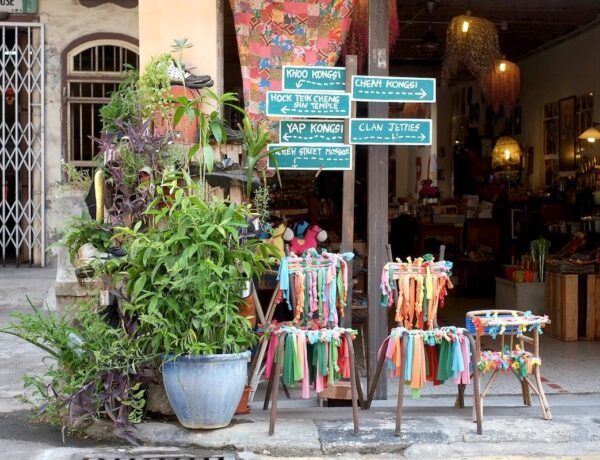 What a great looking place. I’d definitely get some of the incense

I brought some home with me. A wonderful memory of a great trip.

Looks like such a fun day trip, the statues are so beautiful. Thanks for sharing this spot on guide, pinning for my next trip to HK!

Glad you enjoyed it. It is definitely something you must do if visiting HK, a very different experience to the hustle and bustle of the city.

What a fascinating location! The statues are beautiful and you can see the craftsmanship it took to bring them to life. I’m glad I found your post to get some inspiration of other places to see near Hong Kong!

That cable car is beautiful and terrifying at the same time! I’ve never been anywhere in Asia but I’ll add this to my list! 🙂

I can’t believe I did it with the glass floor cabin ! If you have never been to Asia then I would say put Vietnam at the top of your list. I’ve travelled extensively but that is my favourite country 😍

I have been here nine years ago! It was a foggy day unfortunately and my pictures of the big Buddha are like silouettes!! I loved walking through the fishing village. Yes, it is definitely more interesting than the hustle and bustle of mainland Hongkong and Kowloon. Thanks for this lovely blog post that evoked my nostalgia!:-)

You are welcome Jan. Its a shame how the weather affects visiting a destination. Beautiful blue skies always make things look better

This looks like my kind of trip, a raw adventure with a real experience 🙂

It was a fantastic day out.

A more authentic side of Asian culture, and clearly well worth a visit. Love the selection of dried fish in the local village of Tai O Village and stumbling across a sacred cow or three.

Lantau was such a wonderful place to visit. It felt so different from the hustle and bustle of Hong Kong. There were so many weird assortment of fish, not sure what some of them even were!

10 Best Things to Do in Nice in One Day

Hotel Mont-Blanc, France: The Most Luxurious Hotel in Chamonix