The Most Incredible Lion Encounter in South Africa

Imagine a lion encounter where you are sitting in the middle of a pride of lions as they feast upon their recent kill of a zebra. Sounds incredible doesn’t it and this was just what my family and I experienced when we were out on a morning game drive on Shamwari Game Reserve in South Africa.

Sightings of A Zebra Kill

Our ranger had heard over the radio that there were sightings of a kill. Three female lions had killed a zebra and dragged it to a feeding spot. With both excitement and trepidation, we made our way to an area of the bush where the lions had gathered. 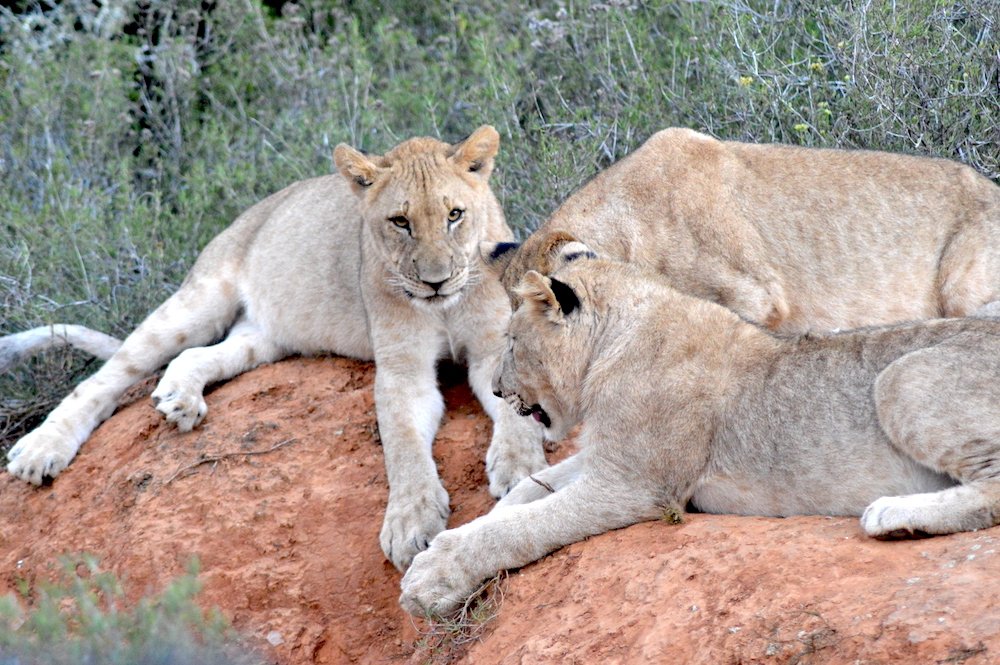 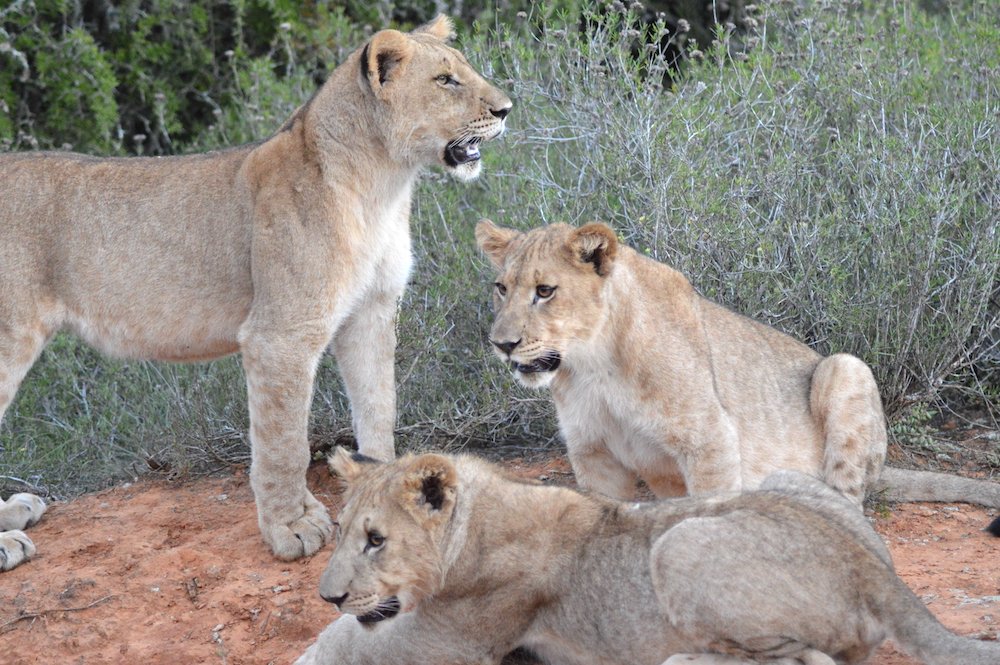 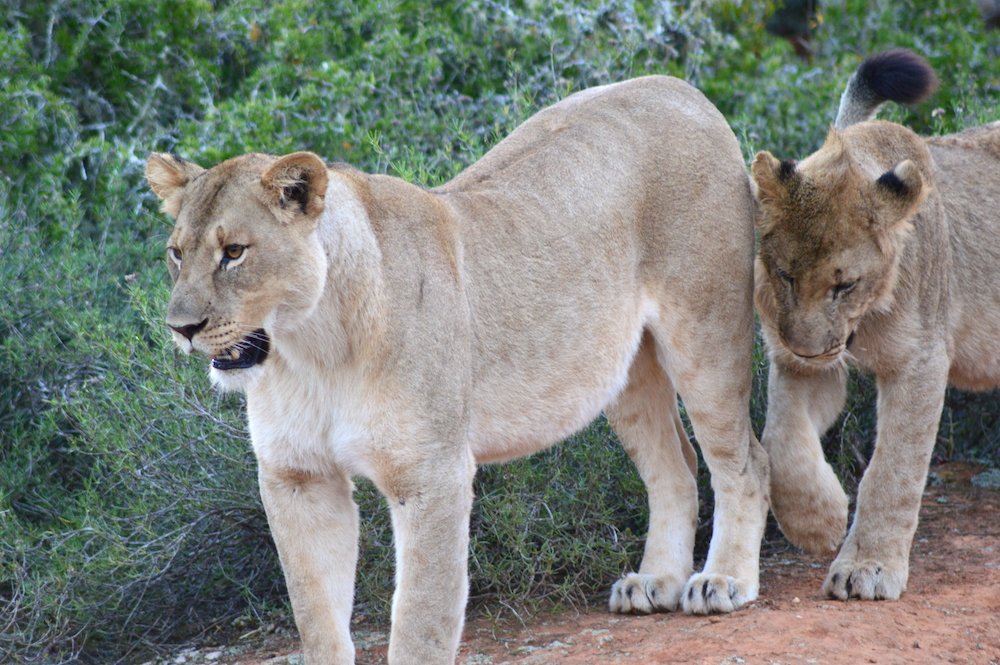 Shamwari has a strict policy that only one vehicle at a time has contact near any of the animal sightings, which meant that we were the first ones to reach the kill site and witness this fantastic lion encounter.

Two females ripped the zebra carcass apart while another looked on. We were in the middle of them and could hear the crunching of razor-sharp teeth on bones while panting and growling came from the lions as they fed. It was a surreal experience, and I felt that I was in a David Attenborough documentary! 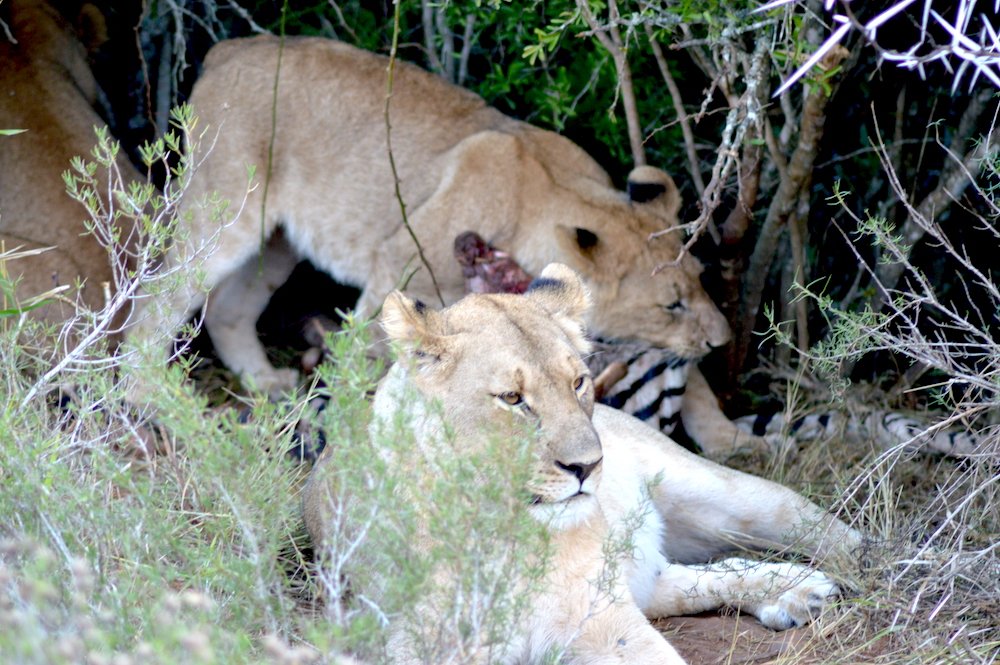 The lions weren’t bothered that we were within almost touching distance of them, but we were pretty scared. Female lions are the primary hunters of the pride and are smaller and more agile than males. They use teamwork to bring an animal down and then share the prize. We hoped we wouldn’t be on their radar today!

I realised I had a zebra-patterned blanket across my knees for warmth and thought they might view me as another dining course. Our ranger reassured us that while the lions were feeding, they were not bothered by us being there. They would regard our jeep as a large unit rather than us as individual bodies and would not be interested in the effort they would need to put in to attack us. And why would they want our meagre bodies when they had two meaty zebras to devour. 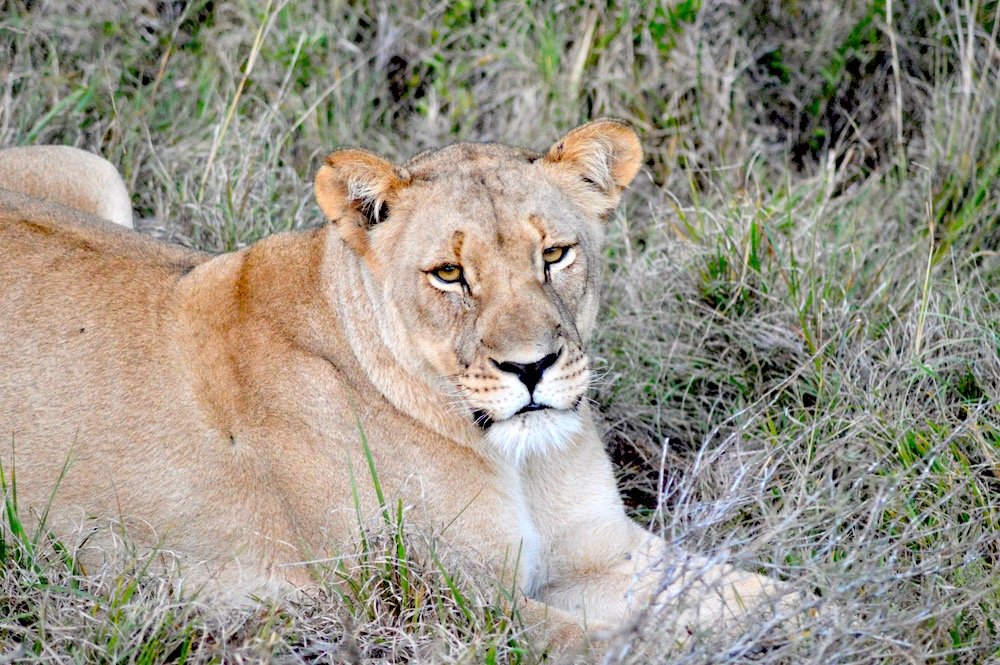 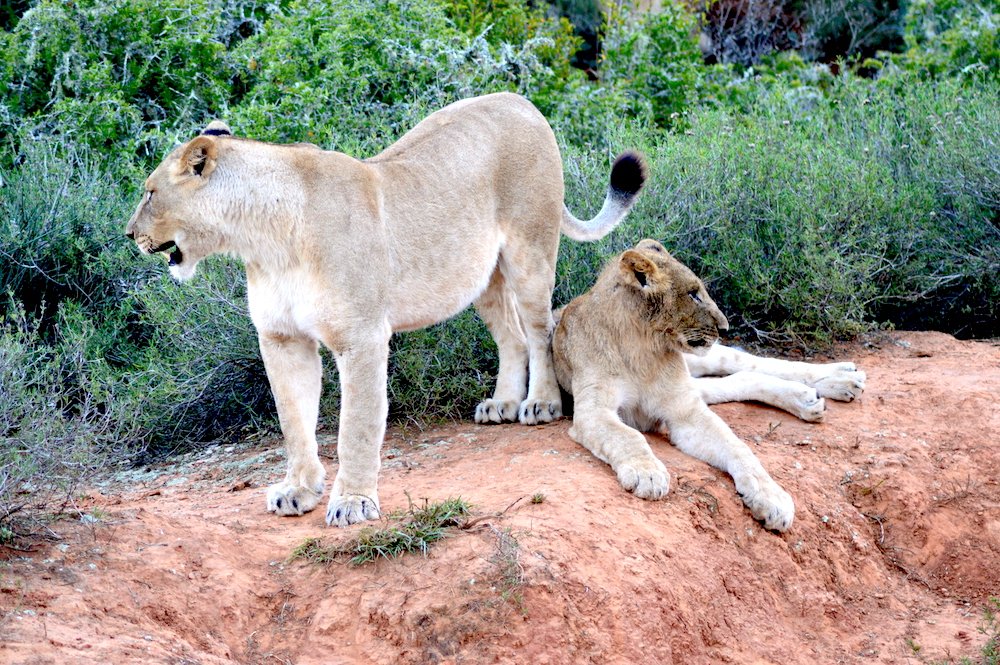 Another female lion looked over the seven lion cubs that were in the pride. The cubs frolicked with her in the thicket playfully jumping on her back and nipping her while she attempted to calm them down. Just like human children, they didn’t understand that mum just wanted some peace before dinner. 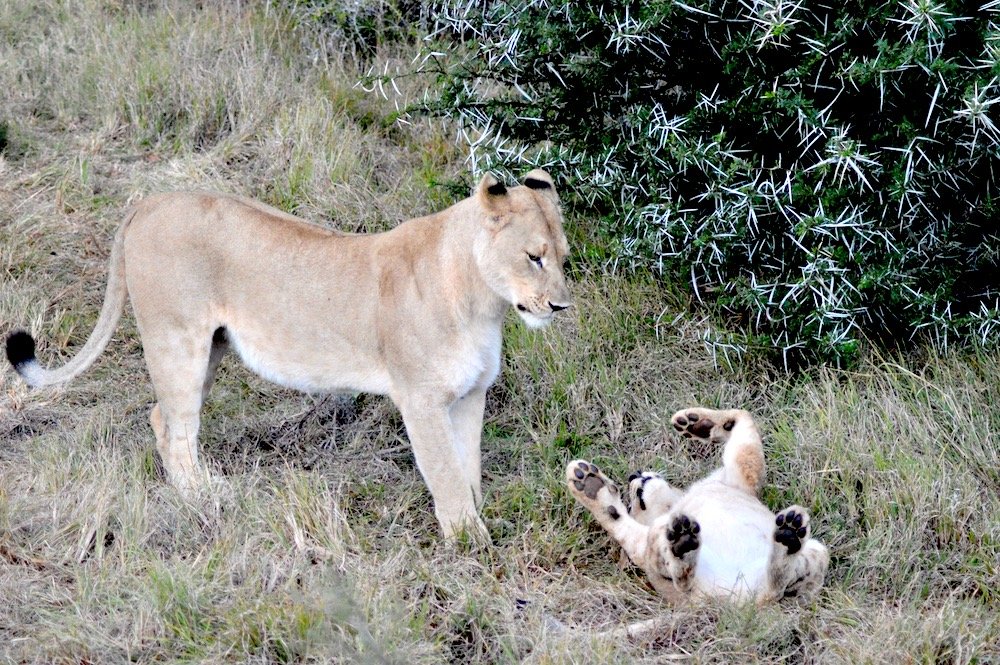 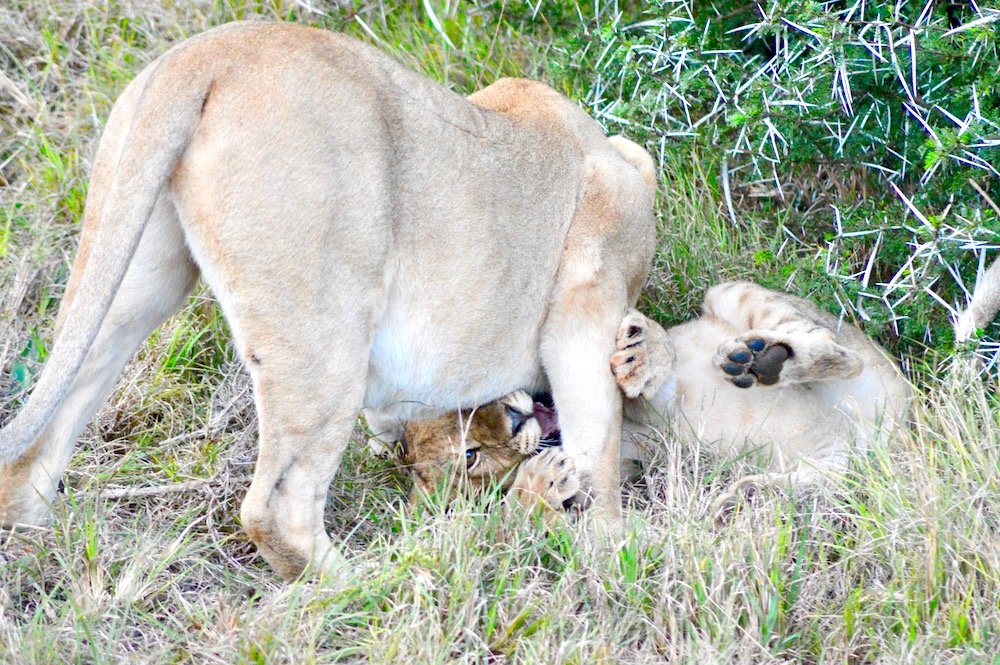 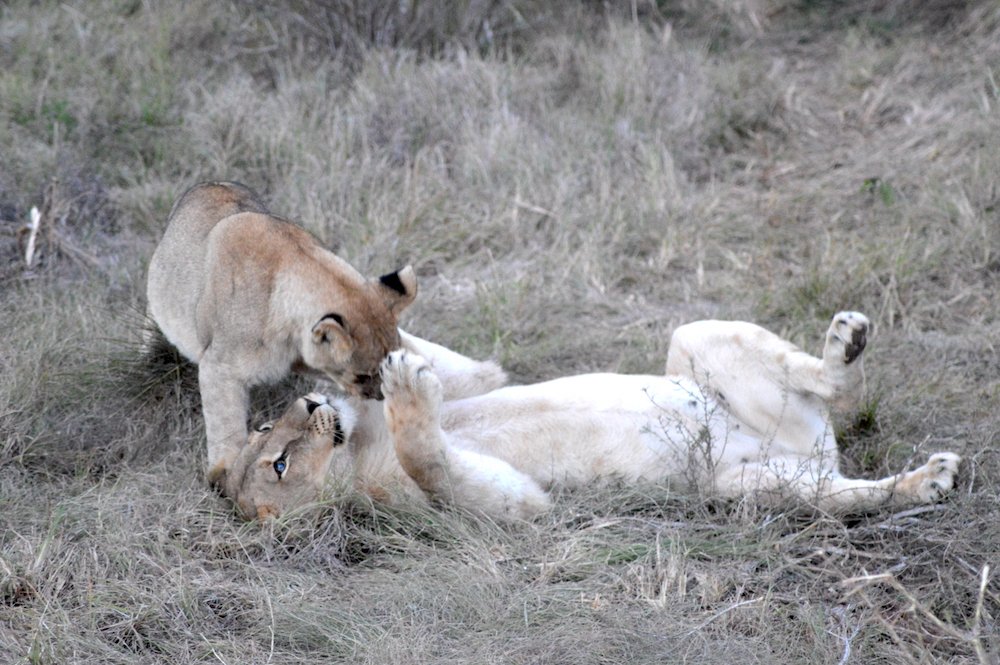 After around 30 minutes of watching the lions, we eventually returned to Quatermain’s Safari Camp, where we were staying in the adjoining Amakhala Reserve. After an afternoon of napping and relaxing, our ranger asked us if we would like to return to the lions at night! Of course, we said yes, let’s face it you only live once.

Returning in the moonlight was an even more terrifying but exhilarating experience. Unbelievably the lions were still munching on the kill, but there was noticeably less of it. With the beam of the jeep, we could see their stomachs were now entirely distended having gorged on so much zebra! Again they glanced up at us but were unimpressed by our presence.

The average lion kills every three to four days and needs to eat  5kg – 7kg of meat per day. This fact explains why they were still feeding when we returned at night. Our ranger told us that once they had finished feeding, they would probably sleep for up to 20 hours! 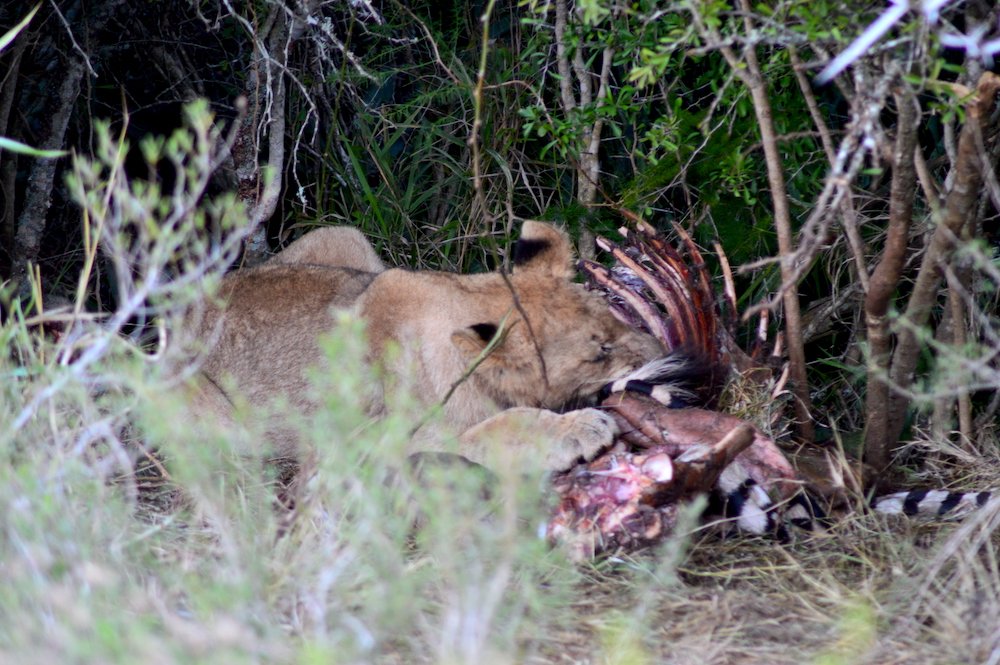 Alone in the Darkness

Our ranger told us to get ready and then switched the jeep’s lights off. We sat alone in the darkness. All we could hear was the contented sounds coming from the lions and the occasional crunch of bone. Unfortunately, we didn’t see the male lion but listened to his roar in the distance. He was patrolling his territory and calling to his females.

We eventually asked our ranger if we could leave. Even though it was a magical experience, it was unnerving not being able to see where the lions were in comparison to the jeep. The headlight beams lit up the thicket, and our ranger asked if it was safe to reverse. The answer was no – there was a lion sprawled out across the grass directly behind the jeep. 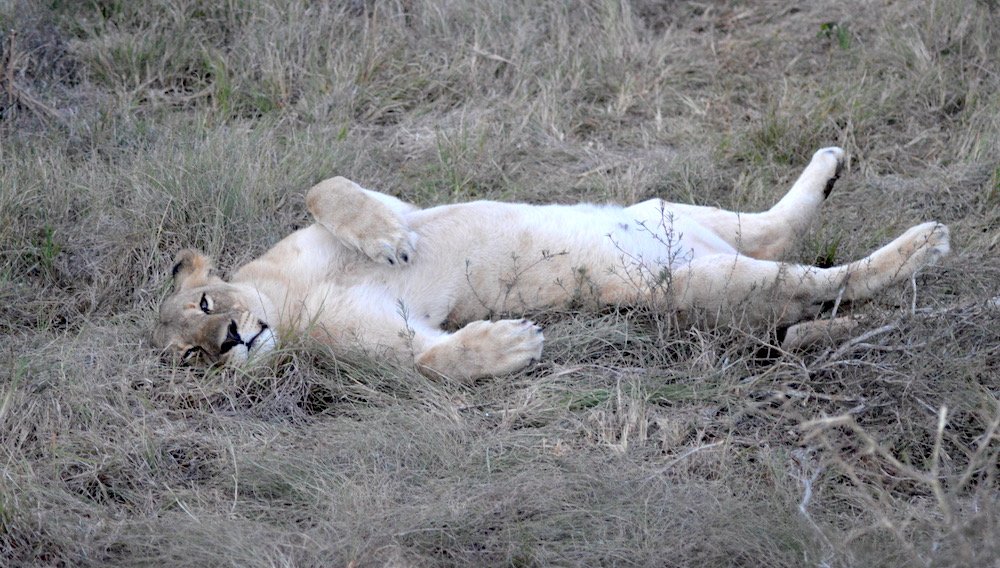 Luckily with a few gentle revs of the engine, our lioness decided to move, and we were free to depart this incredible setting.

Never did I think we would get this chance to be up so close to these magnificent animals. We all put all our faith in our ranger to keep us safe – and alive. She did a great job although we found out later she had only been armed with a torch and a zoom-lens camera but no weapon!

For us, this was an utterly magical experience in Africa. Oh, and did I mention this was our first and only safari.  We must have had luck on our side that day!

A pride of lions can be up to 30 members strong if there are enough supplies of food and water for them all to survive.

A lion’s call or roar can be heard by its pride up to eight kilometres away.

Lion’s mark their territory by urinating in the area.  Other lions then know not to invade that space.

Lions are the second largest cat species in the world. The first being a tiger.

Lions can see six times better in the dark than humans.

Lions are the only member of the cat family to live in a group or pride.

Shamwari is located next to the Amakhala Game Reserve. The international Born Free Foundation has two big cat sanctuaries set up in Shamwari Game Reserve for rescued captive lions and leopards. The cats are in vast enclosures giving them space and privacy. The lions we encountered were in the wild within the reserve and thankfully had not been rescued from terrible conditions.

Shamwari is a five-star luxury resort with facilities and accommodation to match. Check out the best availability and rates for Eagles Crag Shamwari.

On my safari trip, I was able to pass from land at Amakhala to land at Shamwari as different animals were on each of the two reserves. This has now stopped, and Amakhala has reintroduced cats to their own land. If you want to see the big cat sanctuaries, you will need to be a guest at Shamwari.

Amakhala Game Reserve is located 50 minutes from Port Elizabeth at the end of the Garden Route. Port Elizabeth has a national airport which allows ease of travel to and from the reserve.

Amakhala is the premier game reserve in the Eastern Cape and has a land area of 8,500 hectares. It is also malaria-free.

Ten different styles of accommodation are available from tented camps to luxury rooms.

Book onto a day safari to see the Big 5 and other local species if an overnight stay is not possible.

Hlosi Game Lodge offers a day safari and cruise along the river.

Cruises along the Bushman River to spot hippo can make your visit even more exciting. 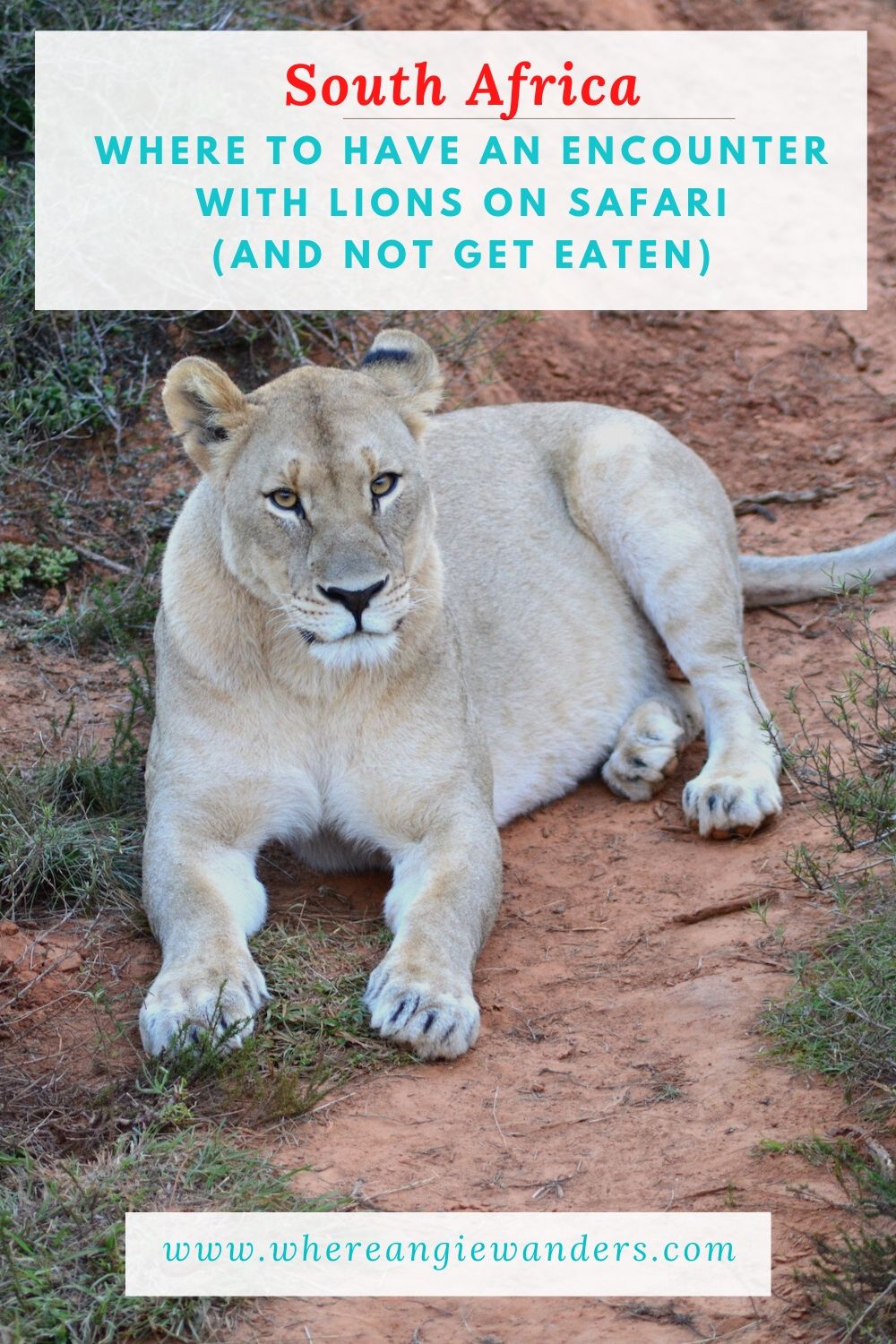 Read Next: Walking and Sleeping with the Elephants of Knysna 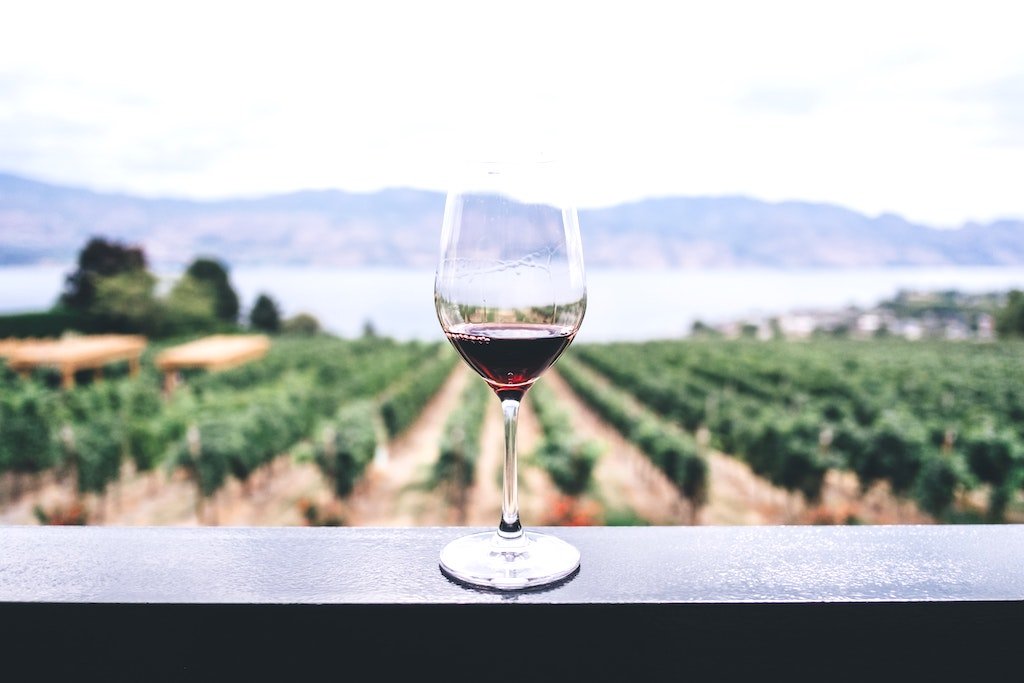 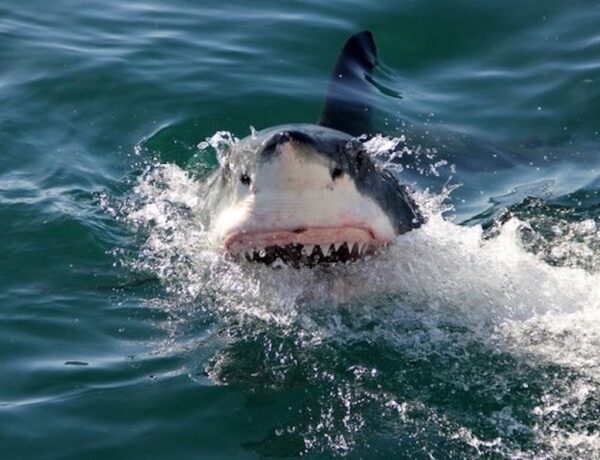 Shark Cage Diving: How It Helps The Great White Sharks in South Africa

10 Sensational Locations You Must See on the Cape Peninsula

Wow Angie! this must have been such an incredible experience. To be privy to a day in their lives. And such incredible photos…I cannot wait to go on a safari again

You had an adventurous encounter with beauty of forest. I love lions and once I had this encounter in Gir forest of India. OMG you have spotted the hunting of zebra too which is really rare sight. I love to visit such reserves which are having actual wildlife encounters.

What a once-in-a-lifetime experience! I laughed out loud at the part about having a Zebra blanket on your lap at the time! I can only imagine the thoughts going through your head. Incredible to see the lions feed and even lion cubs!!!! I will definitely keep these game reserves in mind for our South African trip!

This must be such a wonderful experience – I’d love to visit, too. Last year, I went on a safari for the first time. I saw some elephants and buffaloes in Sri Lanka and already that amazed me. I can imagine that I’d be totally overwhelmed by this Reserve.

I have heard that Sri Lankan safaris are good. I haven’t been yet but would like to compare them to the African ones.

What an amazing experience. On our safari, we saw lions slumbering after a kill, but not the gorging. Being out at night with all the sounds, but not being able to see where they are coming from must have been so exhilarating, and scary!

I loved every minute of it and lived to tell the tale!!

No wonder they sleep for 20 hours, if they eat 5-7kg at feeding! It would be quite the experience to take that tour, hopefully you felt safe.

No I can’t imagine that at all! Dark. Crunch of bones! A memorable experience. But I could completely imagine the encounter … next door’s adorable cat came by with a mouse just yesterday, and she sat outside our patio window, crunching on its limp body. You can take the cat out of the jungle, but it’ll never lose it’s killer instinct.

Your visit to Shamwari Game Reserve sounds great. I am not sure I would want to watch the lions tear apart a zebra. But seeing the lions close and playing would be very cool. A visit at night does sound a bit scary to me. Although I am sure there were many more animals hiding in the dark that you did not see.

I think the kill is all part of the experience of Africa and the circle of life. I am sure the headlights caught a glimpse of other eyes watching us!

Wow, what an amazing experience. Gorgeous lions, although feel terribly sorry for the poor zebra. Saving this post – it’s a big birthday next year for my partner and assuming we can travel then, this is exactly what we are looking to do.

It will definitely be a holiday to remember. A great place to spend a special birthday.

10 Cool and Unmissable Things You Have to Do in Cologne