Marble Mountains were on our route from Hui to Hoi An during our 2-week trip around Vietnam. We hadn’t planned to visit them but as they were on the driving itinerary with the Hai Van Pass and An Lap Lake we stopped to take a look.

I hadn’t had this landmark very high on my list of things to do in Vietnam, and I wondered why the mountains would be on our drive itinerary. With the thermometer peaking at 30 degrees, I asked our driver what time he wanted us back in the car. “Take, however long you want,” was his reply.  Surely once up there it wouldn’t take too long to look at some statues and a few carvings, would it?

I was wrong! It is an incredible place; there is so much to see in the Marble Mountains that we could now understand why our driver had said we could take our time. On every turn, a new sight awaited us, and the thought of the centuries it must have taken, turning these mountains in Vietnam into a place of such religious beauty, was truly astounding.

Facts about the Marble Mountains

The Marble Mountains consist of 5 marble and limestone Element Mountains; Water Mountain (Thuy), Wood Mountain (Moc), Metal Mountain (Kim), Earth Mountain (Tho), and Fire Mountain (Hoa). The caves have temples and shrines inside them dedicated to Buddhism and Hinduism and statues and places to worship.

Marble and stone were extracted from the mountains for sculpting. Mining of the marble in Vietnam is now banned, and it is imported from China.

This article may contain affiliate links – Find out more in my disclaimer.

Need to arrange travel insurance, car hire or accommodation? Check out my resources page to help you plan your trip.

Top Tips for Visiting the Marble Mountains in Da Nang

How to Get to the Marble Mountains

Marble Mountain is a must-see site in Vietnam and can be visited from Da Nang and Hoi An on a Marble Mountain Tour. If you are travelling from Hue as we were, it may be included in your trip itinerary; if not then ask your driver to include a stop at the marble mountains. We visited them during our road transfer from Hue to Hoi An with Hura Cars.

You can also hop on a local bus from Da Nang if you prefer to visit on your own. Numbers #1, #11 or #R16 go to the entrance of Marble Mountains.

The Marble Mountains are in the centre of Non-Nuoc Stone Carving village, 8 km south of Da Nang city centre. You will be able to watch the stonemasons at work, sculpting huge slabs of marble and even have a statue delivered to your home address if you so desire!

How to Enter the Marble Mountains

We ascended the mountain by escalator, a quicker and less exhausting route than taking the 157 steps. You must get a ticket to gain entrance which will cost 40,000vnd and an additional 40,000vnd for the escalator. The mountains are open from 7 am – 5.30 pm all year round.

How Long Should I Stay in the Marble Mountains?

If you want to take it at a leisurely pace, then I would say 2-3 hours, allowing time to stop for a drink or something to eat. Water and coconut vendors line some of the pathways giving a glimpse of hope to tourists who have arrived without their own refreshments.

It is hot and humid in the mountains so prepare yourself with decent footwear to combat for slippery pathways and of course, plenty of fluids. Crowds flock to the mountains, so don’t expect peace and tranquillity. However, we arrived on an April afternoon and still managed to find areas where we could enjoy some solitude.

The Story of The Green Jade Buddha

We had to walk through the various stalls selling green jade marble to get to the mountains’ entrance. Stopping at one we admired a small jade buddha no larger than a thumbnail. The stall-holder said she would give us a reasonable price, but we weren’t sure we even wanted it. We promised that if we did decide to buy, then we would come back to her. She laughed and looked at us, unconvinced. I guess she had probably heard this said many times before.

We spent about two hours in the mountains and eventually made our way back through the market stalls to find our driver. We had decided we did want the jade buddha during our time in the mountains, so we looked for the lady from who we had promised to return. It was like finding a needle in a haystack, but eventually, she saw us, called us over and gave us a really “good price” because we had kept our promise to return!

One small jade buddha now sits on a windowsill in England and is our reminder of a memorable trip to the Marble Mountains.

On exiting the elevator, your first sight will be the Xa Loi Pagoda, a seven-sided six-floored tower.

Pagodas are located all around the mountains.

Buddha and his disciples surrounded by the forest creatures represent Mother Nature.

Tam Thai Pagoda was built in the 17th century, making it around 400 years old.

One of the several Buddhist sanctuaries in the marble mountains.

Quan Am’s statue represents the bodhisattva of compassion, a deity on the way to reaching enlightenment.  In pagodas and on the altars in homes, followers of the Buddhist religion look to her for guidance, protection, and fertility.

The entrance to Quan Am cave

Quan Am bodhisattva carved out of the rock. 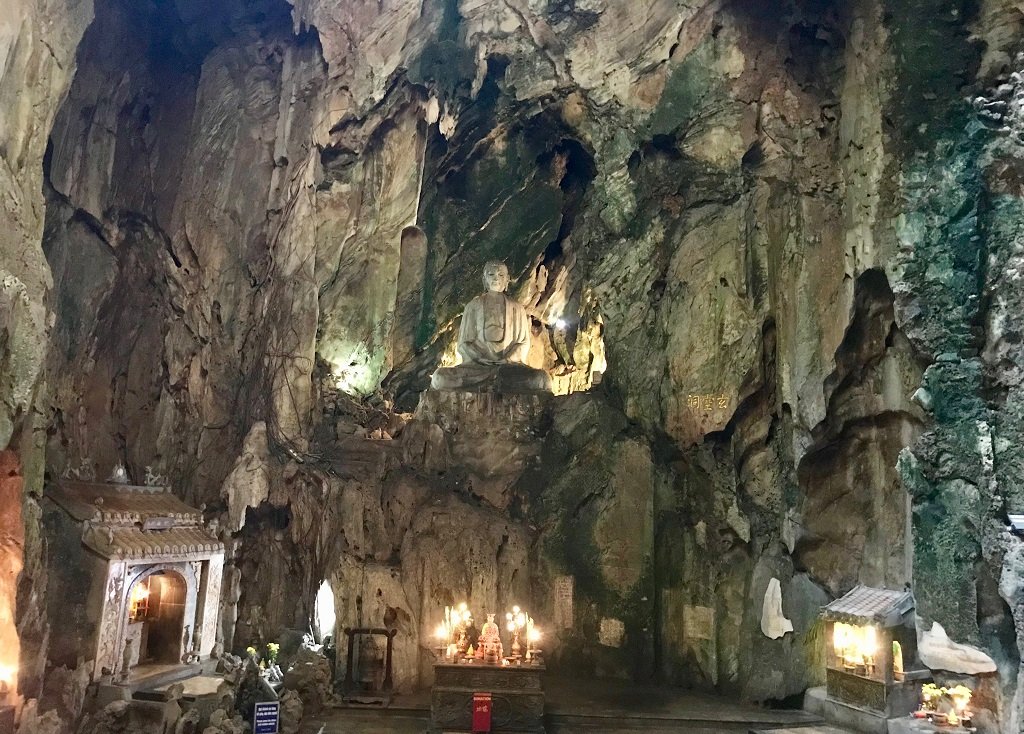 Cave floors are wet, so wear shoes that have a good grip.

The Vietnamese dragon is the symbol of yang, representing the universe, life, existence, and growth.

There are places in the shade to stop for a while and collect your thoughts.

Viewpoints from the mountains allow you 360-degree vistas.

The trail finishes with stairs leading back down to the ground, or you can continue back to the escalator.

EXPLORE MORE OF VIETNAM WITH ME

Looks like a beautiful place to explore despite the hot weather! I love the pictures of the Buddha statues, pagodas and architecture of the temples. I have not been to Vietnam yet, so I am saving this blog for future. :-)

Vietnam is my favourite country. I just loved it and hope to return in the future.

wow there’s a lot of cool things to do in just this one area - thanks for sharing!

I’m glad you enjoyed finding out about the marble mountains 😀

I hadn't heard of the Marble Mountains before, what a beautiful place! I'd be paying that extra money to take the escalator as well, especially if it's as hot and humid as you say.

Yes the escalator was my choice!

This looks like such a pretty place to explore! It looks like you were able to find some quiet spots, despite there being crowds. Any tips on escaping the crowds?

In the marble mountains, we were just lucky to find empty places to sit. I would say the further away you are from the main entry points are the quietest.

I completely missed this when I was in Hoi An years ago! It looks like a lovely place to visit. I'll save the info for the next time we visit. So helpful.

Thanks Jacquie, it was a great place to explore.